Arrone is 19-Year-Old French outcast who left her mum house at the age of 14. “If someone had told me that one day I would be living with no rules, a parrot, two dogs, and a crow, I would’ve never believed them. I am living my dream”. She might only be nineteen years old, but she has the wisdom and life experience of a much older person, as she likes to put it. From the very first sight, you can sense that there is something particular about her energy. It is impossible to pass by without wondering who she is and what is her story. 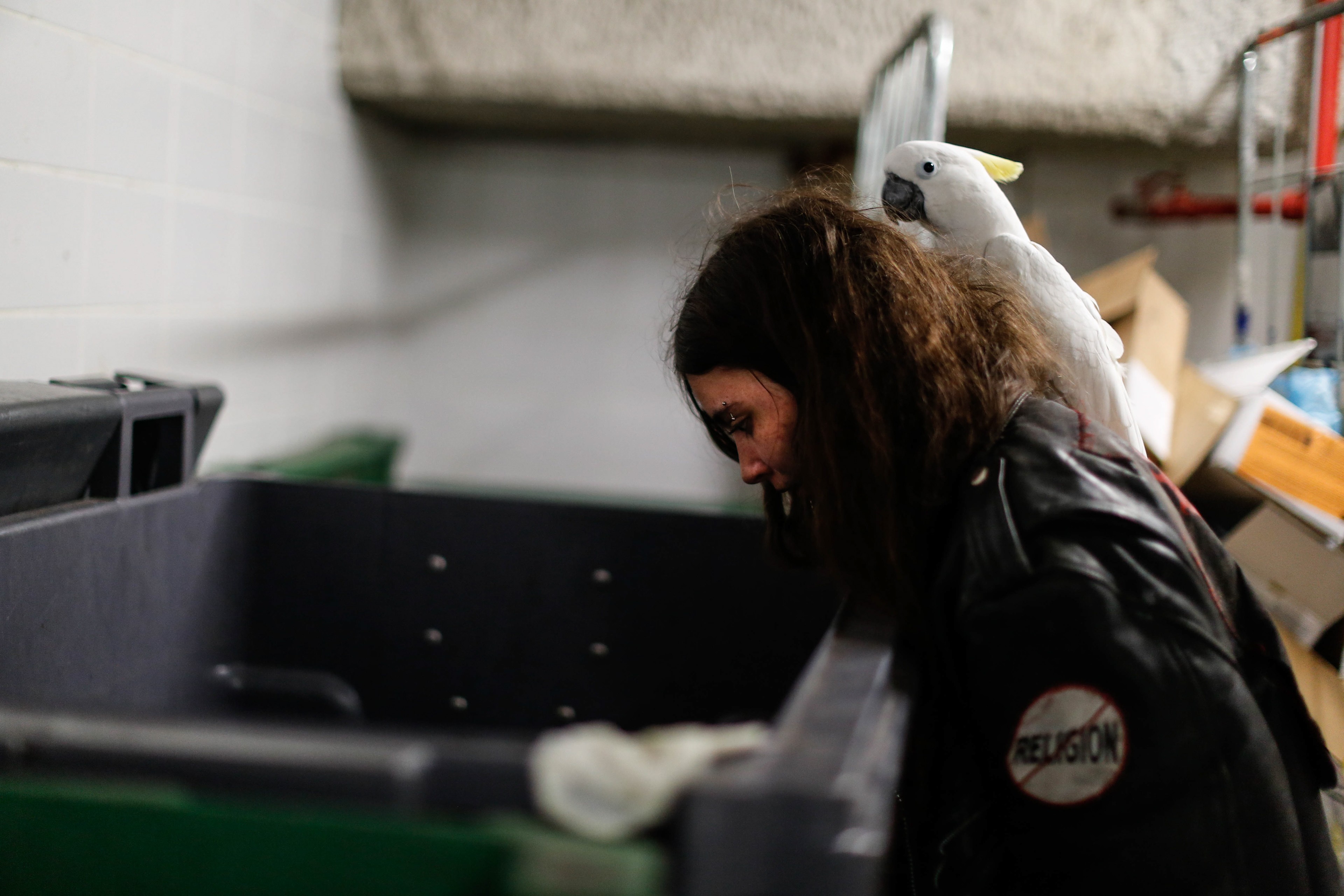 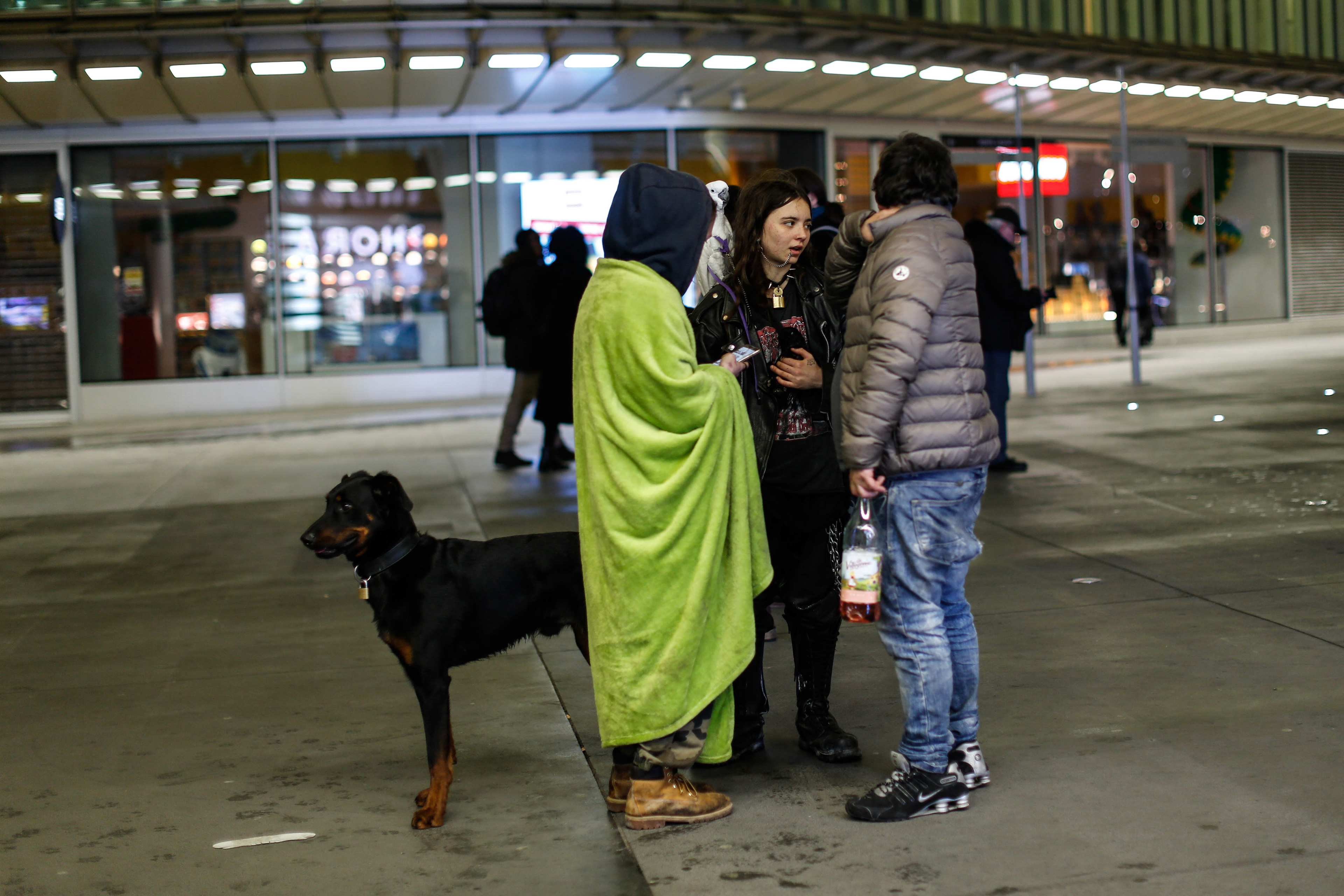 She might seem like a tough punk with her chains and her ‘’fuck me Jesus’’ patched on her leather coat, well she is, but she is also a very selfless and sensitive being. Following her in her daily adventure was quite a gift. You easily understand that despite her difficult past she is a happy person who’s living the dream of freedom, self-freedom, free from the rules and society. She never met her dad and she left the household of her mother and complicated environment at the age of 12 when she started to date a punk aged of 52. She started doing hard drugs and injecting around the age of 14. Witnessing a lot of her friends pass away from injecting she has stopped or at least slowed down the pace, realising that she is now responsible for her friends. Although, she still uses drugs, because of certain addictions and because she simply loves to be high. Her favourite one is LSD. I don’t smoke cigarettes, because I simply don’t see the point in ruining your health for something that doesn’t get you fucked up. 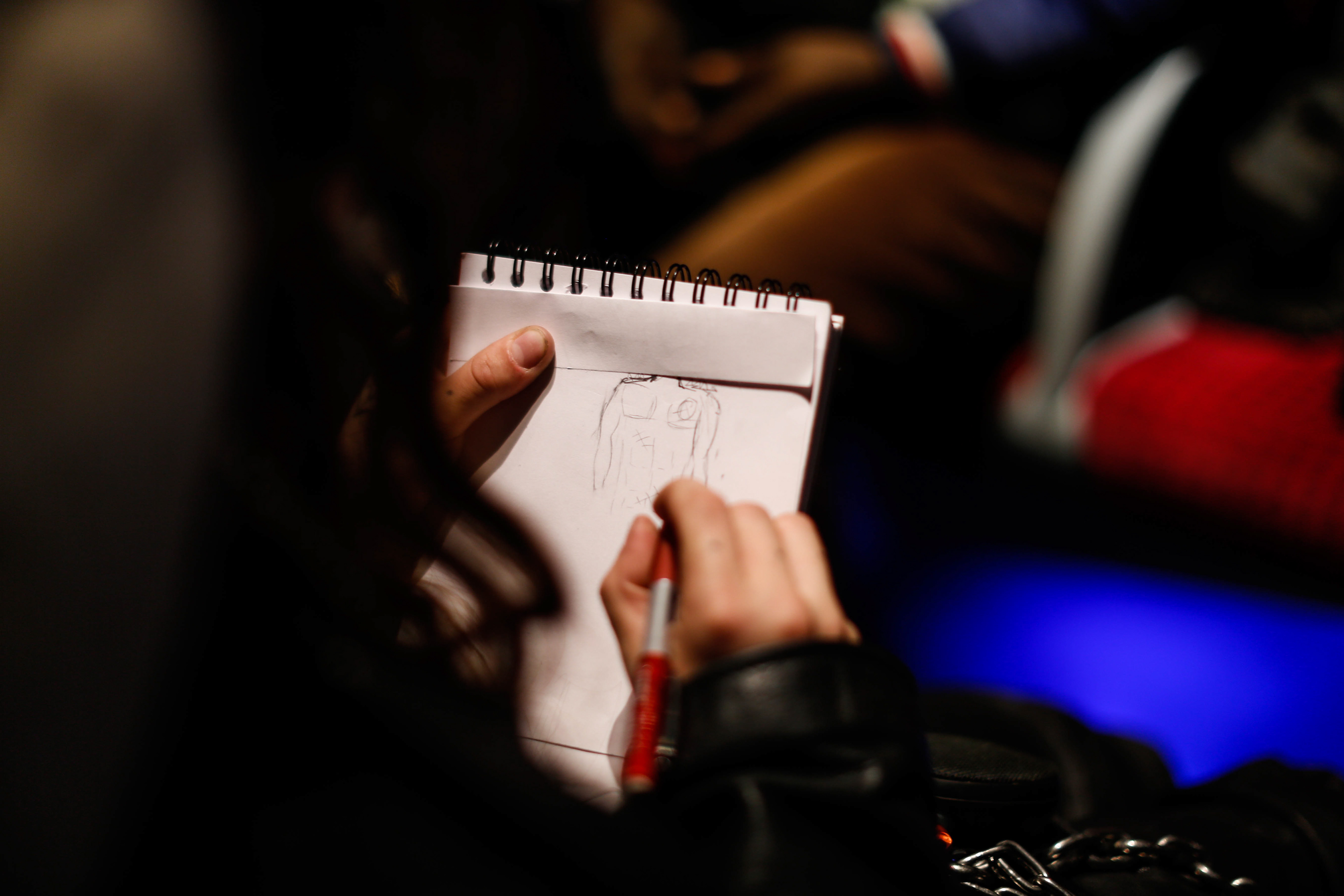 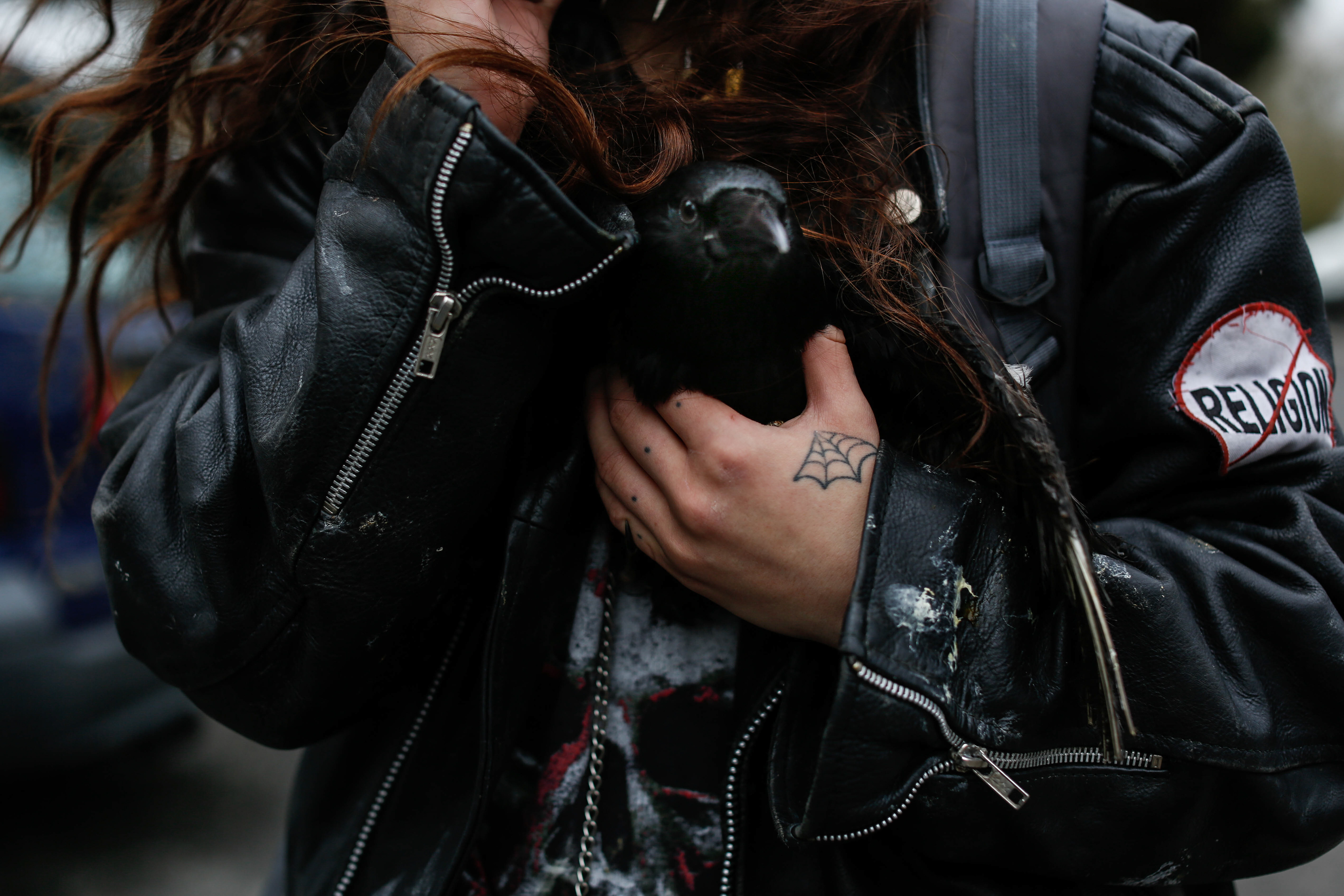 Whether it is while she is simply walking around the city or while she is playing the flute at Gare de l’Est to feed her companions. Her companions as I put it are her family, her best friends, her confidence, her life. They are quite hard to miss as they are as beautiful as her. Her parrot’s name is Cauchemar and he is always hanging on her shoulder, the wounded baby crow she keeps close by is named Gavroche, her tall energetic dog is called Ades and the last but not least is a small bulldog named Cerbère. As I said, they are her life, almost all the money she makes on the street while playing flute goes into feeding them. Spend one day or even one hour with her and you will see that she treats them with more respect and love than a lot of humans do with each other. The relationship she has with her companions leaves you with a thousand questions about the barriers between species that we have built over the years. The two dogs are fed fresh meat from the butcher and vegetables she can get her hands on at the grocery store, the parrot is fed vitamin supplements, fruits, and well the crow eats anything really.

For the past two years, she has been working on a squat in which she completely cleaned and in which she has worked so much. The 22 of March, that they blocked the doors with ‘’anti-squat doors”. At this point, she understood that the past two years of work and cleaning and the thousand projects she had with this squat all vanished. Despite getting very emotional, she stayed rational and apprehended the event as sort of a sign to simply go traveling with her companions. That same squat was meant to be turned into a place for artists to gather and create, it is located far in the suburbs, no drugs were allowed and it had to stay clean. One of her many plans was to turn the yard into a garden using permaculture to sustain herself and her companions. In other words, she had meaningful projects and a will to share the place as a gift. Imagine going back to your place and learning that you’ve been kicked out for no particular reason.

Any normal dependent human would fall apart, but she didn’t. She does not depend on a place to survive. She is a warrior. She has now returned to face a distressing life in the streets of the Champs-Elysées. She has great suffering for losing her faithful companion, the gentle and protective ghost that is living in the house. She is not miserable, she is one of the most positive people I have ever met in my life. She simply chose in her own way to lead a different life, a life outside of the box, with no pressure from society and from rules. 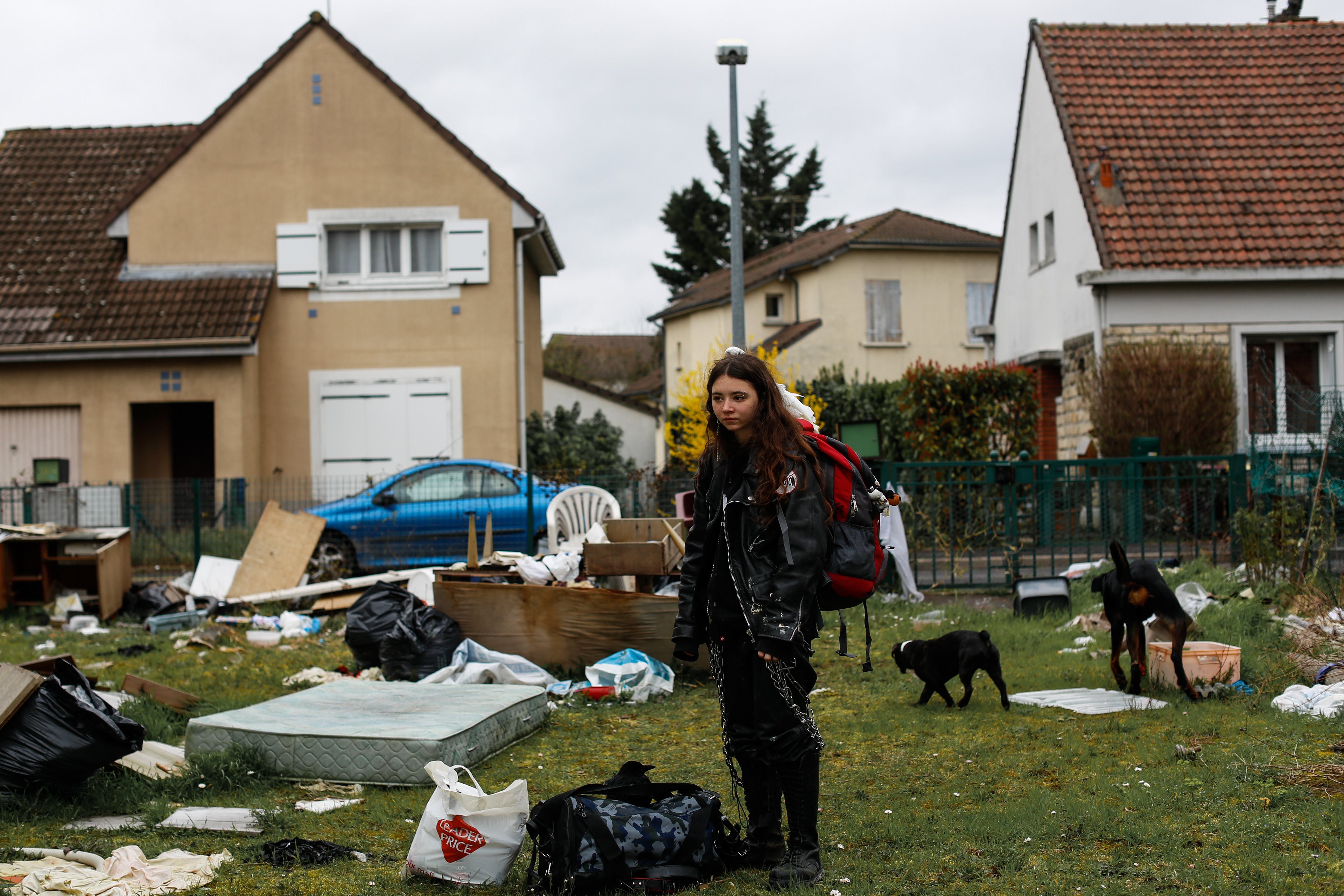 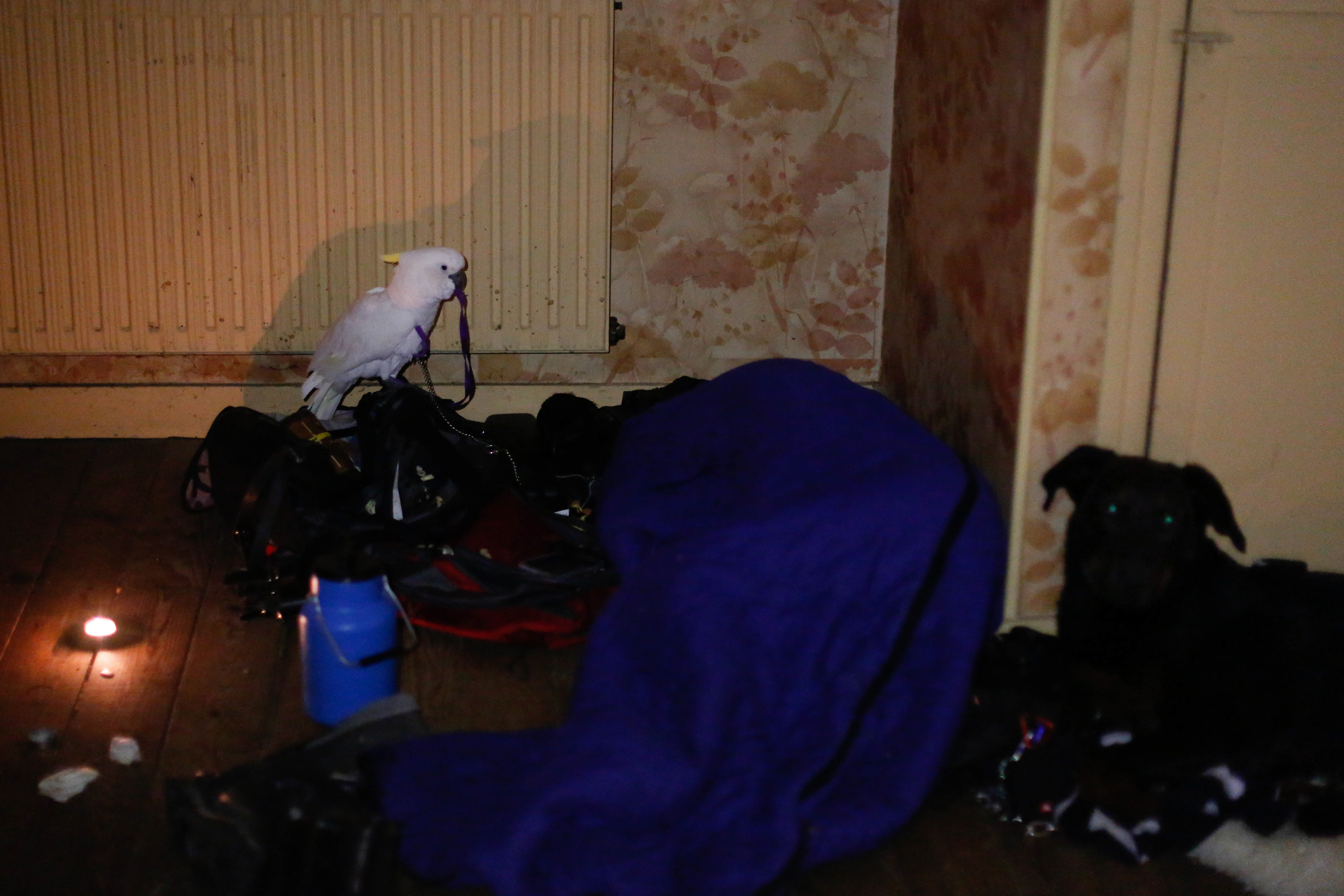